Why Your Car Insurance Is Increasing: It's Not Just You

Do you ever feel like your car insurance rates keep on increasing, seemingly for no reason? You’re not alone. According to the U.S. Bureau of Labor Statistics (BLS) tracking, the average cost of car insurance has increased over twice the overall rate of inflation in the past 40 years. But why? To find out, MoneyGeek investigated the relationship of auto insurance costs to the inflation of other costs related to auto insurance, starting with the overall consumer price index, or CPI. 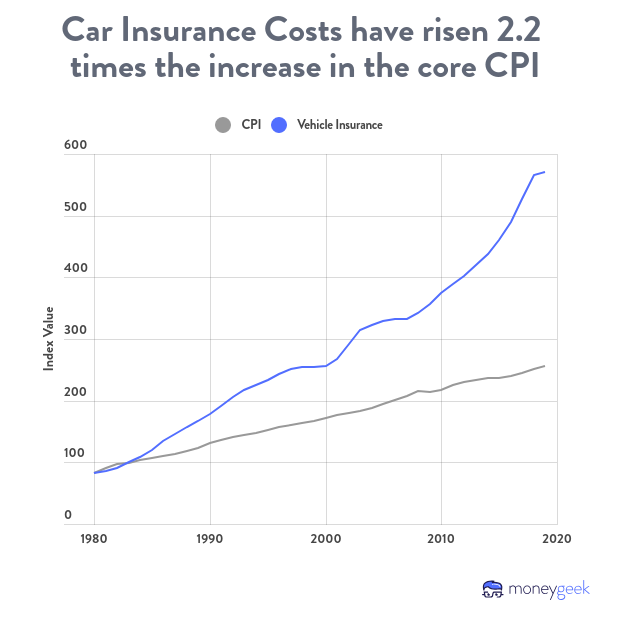 Repairs Have Risen With the Overall Cost of Goods

The cost of repairing a car has increased at the same rate as the overall CPI, which isn’t surprising because repairing a car is primarily labor-intensive. While the technologies inside the car have changed, the need for a good mechanic hasn’t. 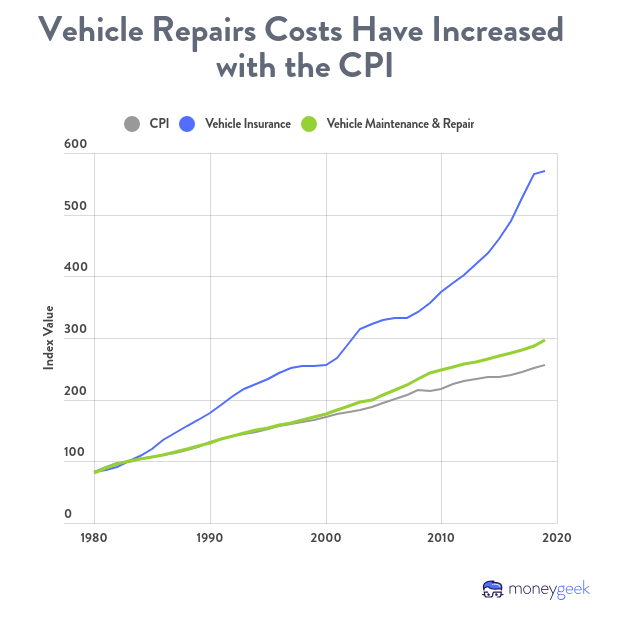 According to the BLS’s new vehicle index, the cost of buying a new car in America has remained essentially flat since 1996. On its own, that’s a surprising statistic. This means that collisions that end up totaling cars aren’t the reason why car insurance prices have skyrocketed. 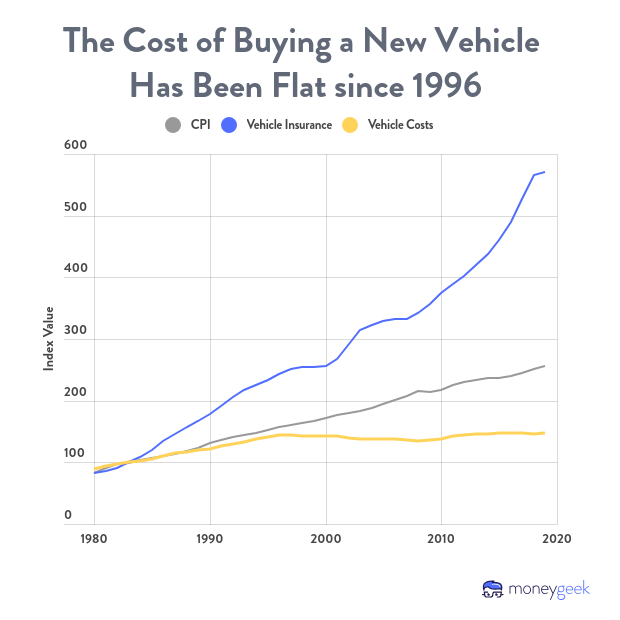 Check Out the Cost of Medical Care Over Time

As the costs of medical care have exploded over the past 40 years, the inflation in car insurance costs has closely followed the same trajectory. As it turns out, your car insurance expenses aren’t as much about the vehicles involved but rather the humans who are involved with car insurance claims. 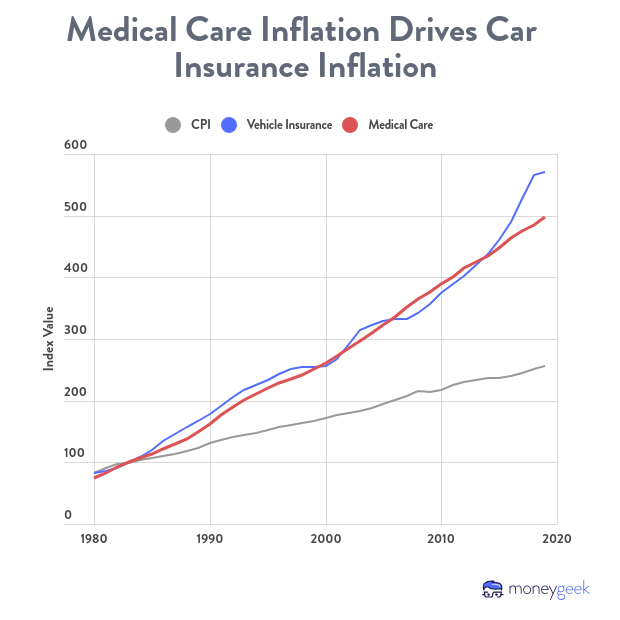 Recent increases in car insurance expenses — over and above medical costs — are explained by high losses due to extreme weather and the increasing number of vehicle miles traveled by Americans each year. The total vehicle miles traveled account for more cars on the road and for increased amounts of time driving by individuals.

According to the global insurer Aon, 2010 to 2019 was the most costly decade ever for insurers. In 2019, the United States suffered $68 billion of damages due to natural disasters. The Insurance Information Institute estimates that the U.S. had catastrophe-related damages upwards of $100 billion in 2017 and it expects increased temperatures, severe storms and wildfires to be a trend in insurance claims. In fact, prior to a bill banning the practice, insurers in California were dropping coverage in fire-prone communities.

Auto Insurance Premiums Forecasted to Increase by 24% (or More)

The Centers for Medicare and Medicaid Services (CMS) predict a 2.4% annual inflation rate for medical care, while the Federal Highway Administration forecasts a 1.1% annual increase in vehicle miles traveled. This model forecasts auto insurance premiums to increase by 24% by 2030.

Importantly, this forecast includes no expectations for increased natural disaster damages. Across the country, many individuals should expect their auto insurance rates to increase much more than 24%, especially if they are living in areas particularly prone to natural disasters, such as fire, hurricane, tornado and flooding, among others.

What Can You Do About It?

While some factors may be out of your control when it comes to auto insurance, you do have options to keep your premiums low.

Shop around for more affordable auto insurance and find discounts you didn't take advantage of in the previous year. Taking the time to do an apples-to-apples auto insurance quote comparison may save you money by making a switch to a different insurer.

You can also use driver-monitored tools and programs, such as State Farm’s Drive Safe and Save™ program and Progressive’s Snapshot program. Your driving record has an impact on your car insurance costs, and these tools help you understand your driving habits. Additionally, you can take a defensive driving course to improve your skills behind the wheel.

Over time, you might consider changing the type of vehicle you drive and your current coverage. It helps to reevaluate your policy each year, especially if your circumstances change. Also, try bundling your car and homeowners insurance for additional savings.

To forecast future auto insurance costs, MoneyGeek used a linear regression. The auto insurance price index was the dependent variable. The medical care price index and vehicle miles data were independent variables. The projection of medical cost increases made by the Centers for Medicare and Medicaid Services of 2.4% was used to forecast the medical cost index. Projection of 1.1% annual increases by the Federal Highway Administration was used to project future mileage. The model does not include any variables to account for possible natural disaster claims.

Doug Milnes is the head of marketing and communications at MoneyGeek. He has spent more than a decade in corporate finance performing valuations for Duff and Phelps and financial planning and analysis for various companies including OpenTable. He holds a master’s degree in Predictive Analytics (Data Science) from Northwestern University and is a CFA charter holder. Doug geeks out on building financial and predictive models and using data to make informed decisions.